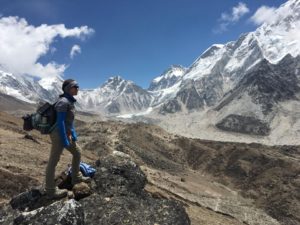 Health and Exercise Science has brought a world of opportunity my way. This past semester, I interned at my former high school helping with indoor and outdoor track and I’ve been able to study in the human performance lab on campus. However, my absolute best experience was spending three weeks trekking to the Base Camp of Mount Everest.

The trip started off when my flight to JFK got cancelled. We sped down to NYC and got to the airport with 15 minutes to spare. Our first flight was a 14 hour flight from JFK to Abu Dhabi. We were delayed and missed our connecting flight to Kathmandu. So we stayed overnight in Abu Dhabi, which was fantastic. 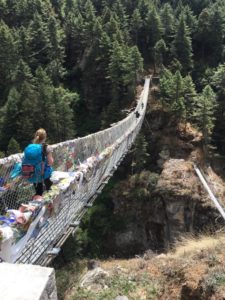 Once we arrived to Kathmandu, we met with the Calgary, Swedish, and University of Michigan teams who were joining us and took another flight to Lukla – which has one of the world’s shortest runways. Hold on!

The journey to Base Camp

Our trekking days were long as we went up and down dirt paths. All the locals were incredibly fit and would lug housing materials on their back while wearing flip flops. Meanwhile, we were in hiking boots, using poles, and trying to catch our breath as they sprinted past. At night we stopped at lodges to acclimate. On those rest days, we explored the towns, went shopping, and played cards.

It took us about two weeks to trek up to the Base Camp. I was surprised to see snow on the ground in June! As we passed Gorak Shep to Base Camp, we saw a pack of yaks come through – they’d run into you if you didn’t get out of the way! When we arrived to Base Camp, you could see the Khumbu Icefall and there were tons of prayer flags. We all cheered and took dozens of photos. I went down to the glaciers and stood by one – it was massive. To get down to the glaciers, you’d have to slide through the rocks, but the views were incredible. 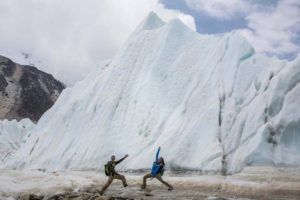 Every rest day, we had a lecture. Topics ranged from decrease in oxygen pressure at high altitudes, to the role genetics might play in altitude sickness, to muscle fatigue. We also learned a lot about the culture in Nepal. To be able to see and interact with the culture firsthand was life-changing. With this trip, we experienced firsthand what we were learning. With the oxygen pressure difference, it wasn’t just learning about it but also having to deal with it as you hiked. 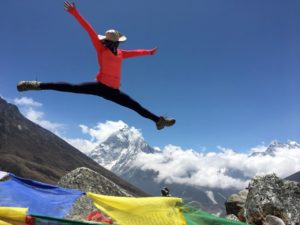 I initially thought about being an athletic trainer. But after this trip, I’m thinking more about being a paramedic or first responder for outdoor adventurers.

A year ago, one of my first published blogs for Syracuse Admissions focused on a seemingly simple question: What are Syracuse students thankful for? This was one of my favorite blogs to write. In the midst of busy college life, it was great to just sit and talk with people about what makes us happy, about the people in our lives who bring us joy. This year, I’m excited to share the 2016, second annual edition of what SU students are thankful for. This year, all of us are abroad and celebrating away from home but still as grateful as ever.

“I’m thankful for another year of life. Another year to grow and experience new things with my friends and family.” — Obi Afriyie, Junior, studying in Dublin, Cultural Foundations of Education and History Major, Member of Student Association, Founder of Syracuse Students Teaching Healthy Habits

“I am so thankful my parents pushed me to move to Italy and travel the world. I’ve realized how great a gift it is to be able to travel and see the world at 18 and I’m so happy I got that chance.”– Jessica Hume, Freshman, Discovery Florence

“I’m thankful for all the opportunities SU provides to its students. Whether it’s class, clubs, communities, or the chance to meet people different than you, I think it’s a university with truly something for everyone.”– Joey Dawson, Junior, studying in Strasbourg, Policy Studies and Information Management Major, Member of SU Kumquat and the Academic Integrity Student Panel

“Since being abroad I’ve realized the things I’m most thankful for. I’m most thankful for my family and friends because their support and love is what motivates and encourages me to do my best. I’m also thankful for the small experiences that I’ve been lucky enough to have and share with those I love. I will have these moments to cherish for the rest of my life and they have helped to shape who I am today.”– Alex Dorn, Junior, studying in Florence, Public Relations Major and Political Science Minor, Member of Public Relations Student Society of America and Hill Communications

Samantha Trombley ’18, is public relations and policy studies major. She is originally from Franklin, CT. Sam is a member of Hill Communications, the on-campus public relations firm. She is also a member of the Girl Code Movement, the women’s club lacrosse team, and the Kappa Alpha Theta women’s fraternity. In her free time she enjoys hiking, volunteering, traveling, and spending time with friends. More blogs from Samantha Trombley.

I am currently studying abroad in Florence, Italy, with the Syracuse University Abroad program. This is my first trip outside of the United States — I’ve never even been to Canada. As this is my first time leaving the country, I naturally want to do anything and everything. When I was planning my weekend trips over the summer, I had every weekend booked. I wanted to visit all of the places I had only seen in movies or read about it books. In my mind, this was my once-in-a-lifetime experience, my chance to see the world.

When I got to Florence, the reality of time sunk in. Sure, three months sounds like a long time, but trying to squeeze in everything I wanted to do was impossible. On top of that, most of my friends who I am traveling with have already been to Europe, so some of the top places I wanted to go were places that they had already seen. I had a very specific vision of what I wanted my abroad experience to be, and when it didn’t go exactly as planned, I started obsessing about it. For most of September and the beginning of October, I was constantly online searching for places to travel to, trying to find the cheapest flights, texting friends trying to convince them to travel with me for the fourth weekend in a row.

A few days ago, I was sitting in a piazza near the SU Florence campus, using an app on my phone to search cheap flights. I realized I had been sitting there for 45 minutes, completely oblivious to everything going on around me. I did not see the beautiful street art two feet away from me, or the man playing the violin in the center of the piazza, or the brilliant hues of yellow and red in the changing leaves. When I looked up and took it all in, it hit me: I was spending so much time obsessing about seeing everything that I wasn’t really seeing anything.

I’ve been trying too hard to make this experience perfect. Studying abroad is an opportunity to discover your passions, see new things, and embrace cultures different from your own. It’s not about getting the most stamps on your passport. It’s about seeing what you can, living in the moment, and stepping out of your comfort zone. I closed most of those tabs a few days ago. I’m ready to see where the rest of the semester takes me, and hopefully I will be more open to the beauty right in front of me.

Samantha Trombley ’18, is public relations and policy studies major. She is originally from Franklin, CT. Sam is a member of Hill Communications, the on-campus public relations firm. She is also a member of the Girl Code Movement, the women’s club lacrosse team, and the Kappa Alpha Theta women’s fraternity. In her free time she enjoys hiking, volunteering, traveling, and spending time with friends. More blogs from Samantha Trombley.